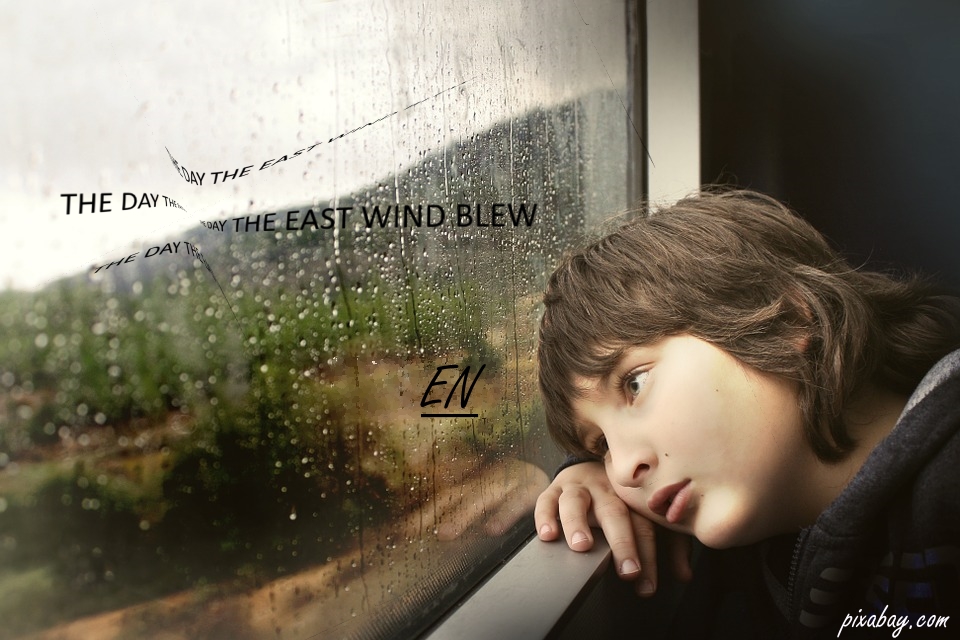 Life is as unpredictable as a weather vane, as stormy and sunny weather interchange within a matter of seconds. Yet, more often than not, misfortune rains on our parade, washing us down a dark, dirty, dismal chute of dread and dismay. Such are the vicissitudes of circumstances which are astronomically unpredictable. My life is no different.

It was a resplendent morning, until the rude intrusion of the discordant alarm jolted me out of bed, wide-eyed and wild-haired. The moustachioed face on the wall boomed seven and that could only mean one thing. I was going to be late for school.

Meanwhile, the clinging and clanging of pots and pans announced a mouthwatering breakfast of fried noodles. The tempting aroma of the savoury dish sent my stomach into a fit, churning and growling. Knowing better, I could only stay my hunger with a hurried gulp of coffee. Unfortunately, an ill wind blew my way. In haste my hand missed the handle and sent the ceramic cup crashing to the floor. its scalding contents splashed into a hot, sticky mess.

Having no time to lose, I could only throw the puddle an apologetic glance before dashing towards the streets, leaving my mother steaming with rage, her shrills unheeded. As I raced against time, my quick wits mapped out the fastest route to my destination. Though muddy, the lane would guarantee a shorter journey of 1 km as opposed to the usual 3 km, thus charting an ETA by 7.20 a.m., just in time to touchdown before the school bells chimed.

The torrential downpour the night before did not assist in my endeavours to evade the brewing storm hovering over me. The alley was no better than a swamp, all filth and eddy. I foot-slogged through the sludge, having seen no other way round it but through it. Anxious as I was to minimise any damage to my crisp white uniform, I failed to evade the wooden plank camouflaged in the muck. I tripped. To add insult to injury, I landed face-flat in the despicable soil. Covered in mud from head to toe, my bemired self was an alien visage from some planet yonder.

Bemoaning my ill fate, my weary feet trudged on for a distance before fortune eventually struck. I caught sight of a tap. Heart racing like a bullet train, I made my way to the faucet, heaping prayers upon prayers for it to work. The lucky star was actually glowing for the second time; water came gushing out like a fountain. I now felt a little less extraterrestrial after some cleaning and washing. I tried to make up for the lost time, running like a cheetah rather than a hare. Puffing and panting I reached the gates of the education institution but was abruptly refused entry by the grisly countenance of the doorkeepers of the Hall of Osiris. My efforts were in vain. No plea could soften their iron hearts and my name was dragged down by Ammit into the black-listed records of late-comers.

It was only the first half of the morning and the weather vane foretold of more calamities to come. Miss Ong was furiously scribbling the Calvin Cycle on the blackboard. Her dedicated strains reverberated throughout the classroom as she spoke to the board. She made a casual turn of her head and her tired eyes fell on me. In a moment she turned as pale as a sheet with her oral cavity forming a perfect “O” like that of a goldfish. I wondered if she recognised me for she stared at me as if I was indeed an unidentified organism from a foreign land.

Then a storm cloud rolled over her head. Like the monsoon season, she thrashed down a heavy shower of questions in a single breath. “What happened to you?” She asked in astonishment. “Why are you late for my class?” Another followed. “What’s with your uniform?” Came another. Then, without another thought, she roared with a stern stare, “Get out and clean up now!”

I lavished myself with extended time, deliberately in order to avoid the squeals of Miss Ong. As the bell screamed the end of biology, I ambled my way to the dreaded class. Forty pairs of scrutinising eyes fell upon me. I felt nakedly exposed as they gazed from my head to toe with weird wicked frowns on their faces. I literally heard their snickers and chuckles in my mind and longed to scurry down a rabbit hole to bury my unsettling existence in the room.

People say that time is a winged chariot but mine was a rickety rickshaw that day. I sat in agony hoping against all odds to be rescued from this miserable misfortune of milestones. Then the gale picked up again: the abhorred east wind. It whisked around my heels along with the proclamation of recess. My mind reeled back to the savoury fried noodles that I had missed and my limbs were at the beck and call of my stomach. Vehement not to miss another meal, I sped to the canteen, only to crash head-on into an obnoxious girl who stood like a hulk. It took a while for my ostrich brain to configure that in all my haste, I had collided into this intrusive maiden thus offsetting her balance of the glass that she was holding. She now stood with bleeding stains on her uniform; the empty receptacle still in the grasp of her palm.

With no hesitation or compassion; neither mercy nor clemency, she yelled some abusive words which my mental faculties had no concern to comprehend or interpret. Hunger was overwhelming and there was no time for apology. Besides, the damsel in distress would surely not buy a “sorry”, so she seemed. I hurriedly turned to the stairs descending towards the stalls when the bell rang, announcing the end of our break-time. My disgruntled stomach had to be pacified with salivary amylase, hoping that the hydrochloric acid would not corrode the paper-thin lining. Fearing the thought of another vocal whipping lest I be late for Mathematics, my slow stroll became strides then a stumble and a fall. Missing a stair of the flight of steps I fell hard on the concrete floor with my face merely missing the hit, my knee, however, not as lucky. I limped all the way back to my class with a piercing pain at my right knee. The on-lookers stared in disbelief at the sorry spectacle in the Globe theatre that had set up shop before their eyes. The pain mingled with humiliation brought involuntary tears to my eyes. Thankfully, my form teacher had not noticed the bead that had formed around my eyeballs. Instead, with utmost causality she remarked, “You are as clumsy as an egg. Have you swallowed a grasshopper for breakfast?” Little did she know that I could eat a horse.

The arms of the clock dragged itself pathetically around its face. Eventually the hour hands faithfully pointed 1.00p.m. I fervently prayed that the ordeal and omens for the day was over. Alas, it never rains but it pours. After the strenuous trudge back to the familiar soft-wired fence of my humble abode, I confidently dug my hands into my pockets, certain that this would be the end to my series of unfortunate events. The house keys were now the map to my quest for solace. Fingers turned into paws and then claws, frantically scratching, scuffling and rummaging through every place possible, from the usual trouser pocket to the one on my chest, from my clothes to my school bag, all to no avail. I had forgotten to take with me and the only alternative now was to wait until the return of my dear and beloved mother and that would be 6.00p.m., another 4 hours under the scorching tyrant lounging atop his cotton white cushions.

Time went ticking past the hour. The angry sun slashed my face and body with its cruel rays like a whip upon the back of a slave. Sweat was trickling down my forehead and I was dying of thirst and hunger. My viscera were all confused into a heap of tangled wires and visions of a mirage appeared in this gravel Sahara. The neighbouring houses seemed to metamorphose into towering castles with majestic front lawns, only jarred by the Gothic iron-wrought gates looming like prison bars.

Lost in the hallucinations ghosting around the vicinity, a demonic dog with an eerie likeness to the hound of the Baskervilles crept out of its kennel onto the streets. Was this a nightmare? No, it was another bad twist in my otherwise banal existence. Mr. Goh’s ferocious Rottweiler locked eyes with mine and decided a game of tag was in order with this quaking human. The aforementioned two-legged took to his heels and ran like the wind, away from the safety of his cave, only succeeding in encouraging the barking mammal’s whim. The game was on. Luckily for me, the Witch of the East decided to call it a day after watching me run laps at the mercy of the four-legged beast. A cool wind breezed past and stroked my heated head as the dog’s master summoned it back to its lair. Pusillanimously I returned, lamenting my ill fate at the toying hands of moving air.

When the sun had gone to bed, leaving the firmament to the twinkling of a constellation of stars, I began my tale of my unlucky adventures to my mother. She laughed carelessly, and fished a line out of Rudyard Kipling, saying, “If you could keep your head when all others are losing theirs.” I blamed the foul wind for my ordeals but my mother blamed me…how the east wind blows today.

A learner and a mentor; A reader and a writer; In two worlds, two minds, two souls View all posts by En